Acid Mothers Temple & The Cosmic Inferno - Hotter Than Inferno/Live in Sapporo (with download!!) 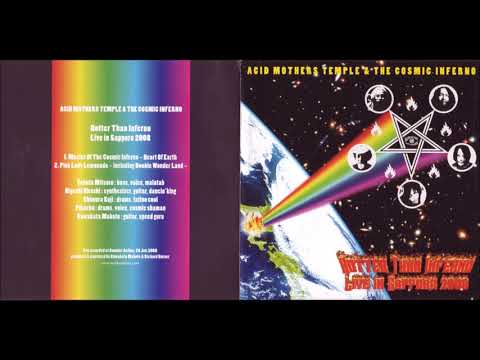 I don't think it's any stretch to say that Acid Mothers Temple is my favorite band of all time. These guys are just endless inspiration and endless pleasure of the ears. Originally I had another AMT album in my queue of things to listen to, Chaos Unforgiven Kisses, but I mistook it for this one. I hadn't heard this one before, and what the goddamn I was fucking floored. Just totally. The riff Kawabata Makoto improvs over is absolutely infectious for the mind, and Pikachu's drums/vocals just send me sky high. AMT is no stranger to vocals in their performances or studio work, but shouting akin to Boredoms is something I never knew I wanted from AMT. It's so perfect, like hot sauce AMT always needed.

There is something to be said about vocals really helping to drive, or color, longer instrumental pieces. Look at Amon Duul II's 18 minute masterpiece, Yeti. Chris Karrer and Renate Knaup briefly trade and share vocal duties in the song's breakdown. They come out in frenzied shouts, giving the listener something to really hold on to. I wish I had a better way to describe it, but a similar and perhaps more crystal example is on Boredoms' 55 minute noise piece, "GO!!!" Five minutes of sampling and light noises before vocalist eYe shouts "GO!!!" into the listener's ears. Then it's cacophonic noise for...almost then on. There's a spoiler, and I wish I didn't have to do this to illustrate my point, but around the 20 minute mark, all sound stops, like an engine sputtering out suddenly, when eYe shouts the band back in again with another "GO!!!" There's an enormously different, I would say lesser, energy without eYe's vocals at the beginning and 20 minute marks. The same thing is happening here, on Master of the Cosmic Inferno, and the Pink Lady Lemonade rendition. Tabata Mitsuru's constant "Pink Lady Lemonade!" and "You're so sweet! Ooohh you're a Pink Lady Lemonade!" just add oodles of fun to a classic AMT track. Factor in the noise and fuzz, either from the quality of the recording or some alterations to their instruments, and this is just a damn perfect live show. Some people might be put off by Doobie Wonderland, I know I was, but I've learned to really love it. "Disco, hey!" Helps that the show doesn't end with Doobie, but with more PLL.